This document gives a brief overview of the design of Asterisk-Java and the requirements that lead to this design.

When I first stumbled upon Asterisk there haven’t been many options to integrate your own applications.

First of all you had the possibility to write your own Asterisk applications. That’s the way many internal functions are implemented, for example Asterisk’s Dial, Voicemail and Queue commands. This approach usually requires writing a small module in C that uses Asterisk’s internal API. It is compiled into a shared object that is loaded when Asterisk starts. Your application is then tightly coupled to Asterisk but has access to any internal structure.

The second approach is to write AGI (Asterisk Gateway Interface) scripts. An AGI script is to Asterisk what a CGI script is to an HTTP server. You can think of AGI as a means to make your dialplan more dynamic by handing control to an external process. As with CGI in its early days Asterisk had to spawn a new short lived process for each AGI request. When using external application that consume a lot of resources at startup (like spawning a Java Virtual Machine when launching a Java application) this approach has major drawbacks. These shortcoming have been mitigated with the introduction of FastAGI that doesn’t spawn a new process for each request but communicates with a long running process via TCP/IP.

The third approach is to use Asterisk’s Manager API. The Manager API allows an external application to query and change Asterisk’s state by sending actions and listening to responses and events. Communication occurs via TCP/IP. Compared to AGI the Manager API works without the need to operate on a concrete call in Asterisk parlance a channel).

The last approach is to talk to Asterisk via IAX (Inter Asterisk eXchange protocol), a UDP based protocol used by Asterisk to communicate with other Asterisk servers and IAX enabled phones. In contrast to AGI and the Manager API IAX allows passing media streams, for example sending and receiving audio.

Regarding the first approach a JNI (Java Native Interface) based solution (JAsterisk) is available that spawns a Java Virtual Machine from within Asterisk and exposes Asterisk’s internal API. Development of JAsterisk seems to be discontinued. Due to the involved tight coupling this approach is questionable anyway.

Regarding option two and three I realized there were two implementations of FastAGI for Java but none for the Manager API. So I decided to build a library to make those interfaces accessible from Java applications. This is what became Asterisk-Java.

Regarding IAX there is a C library available and a Java wrapper using Java Native Interface (JNI). Several people are working on a pure Java implementation though up to now no usable implementation is available to the public.

So what are the requirements for a library like Asterisk-Java that focuses on AGI and the Manager API?

In one sentence: Asterisk-Java must be flexible, robust and easy to use and maintain.

Flexible means you should be able to use it in a variety of different environments, like standalone Java GUI applications running on a user’s desktop, servlets running in a J2EE servlet container, Java webstart applications, or maybe even applets if anybody is still using them. Being flexible also means you should have access to any feature exposed by the corresponding Asterisk interface and not be limited in any way due to using Asterisk-Java. And finally being flexible also means it should be easy to extend Asterisk-Java to support additional features. This extensibility is important when you choose to run a modified version of Asterisk that supports additional actions and events through the Manager API or additional commands via AGI.

Robust means you can focus on your own application and rest asured that Asterisk-Java “just works”. This implies you don’t have to worry about things like reconnecting after restarting Asterisk. Being robust also means that Asterisk-Java must still work as expected when put under heavy load.

Easy to use means there should only be a small number of well defined and easy to understand classes and interfaces that an application developer must be aware of. The programming model should follow the style Java developers are used to.

And finally easy to maintain means being well structured and allowing for automated testing. Of course being easy to maintain also requires extensibility as stated above as Asterisk itself is in active development and new features that Asterisk-Java must keep track of are added all the time.

Let’s have a look at Asterisk-Java’s overall design.

You might have noticed that Asterisk-Java is composed of two packages: one to support AGI and one to support the Manager API. Although these two packages are quite different (due to the conceptual differences in the Asterisk interfaces they support) they share several common design principles. This section will highlight them before we dive into the details of the two packages.

To provide extensibility the commands and replies (for AGI) and actions, repsonses and events (for Manager API) are designed as class hierarchies with one abstract base class at the top of each one. Asterisk-Java does not need to know the concrete classes upfront so you are free to extend these hierarchies as needed. There is a little difference in how the two packages implement this strategy, but the general concept is the same.\ Note that this looks like the GoF Command Pattern and in fact both are fairly similar. The difference is that Asterisk-Java’s commands and actions are not self-executable. Instead of an execute method there is a uniform way to “render” them to the format Asterisk understands (i.e. convert them to a String that can be sent over the wire). When using AGI this is done by the AgiCommands themselves that provide a buildCommand() method, when using the Manager API there is an ActionBuilder that renders ManagerActions by using reflection.

This section describes the design of Asterisk-Java’s support for FastAGI. The corresponding Java package is called org.asteriskjava.fastagi. 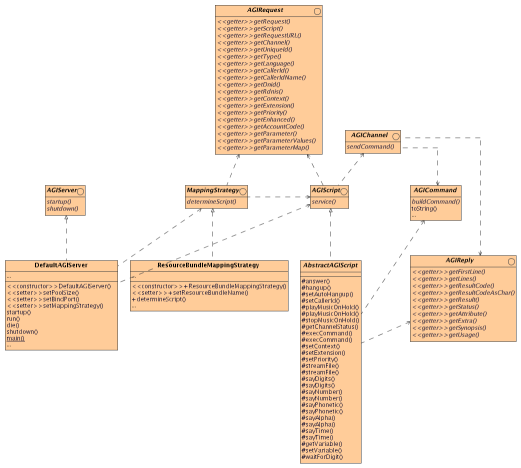 As you can see on the diagram the AGI package of Asterisk-Java consists of three fundamental interfaces: AgiServer, AgiScript and MappingStrategy.

The responsibility of an AgiServer is to listen for new incoming AGI requests that an Asterisk server directs to that server. The AgiServer must then choose the right processor for that request, invoke it and provide it with a means to send commands to Asterisk and receive the corresponding reply.\ Asterisk-Java includes DefaultAgiServer that contains the default implementation of this interface.

The third important interface in this package is the AgiScript. An AGI Script is the piece of code that is invoked to service the request. An AgiScript is to Asterisk-Java what a servlet is to a servlet container. So when you want to expose your own Java based services to Asterisk you must implement this interface. The AgiScript interface is really simple: It contains only one method called service() that is passed the AgiRequest and an AgiChannel, that allows you to send AgiCommands back to Asterisk.\ Asterisk-Java also includes an abstract base class that implements the AgiScript interface and provides convenience methods for sending commands. You can choose whatever you like more: either implementing AgiScript or extending BaseAgiScript works fine.

This section describes the design of Asterisk-Java’s support for the Manager API. The corresponding Java package is called org.asteriskjava.manager. 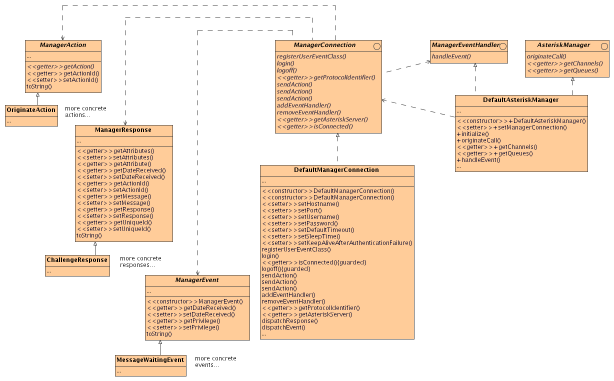 In contrast to AGI communication between the Asterisk server and your application is not initiated by Asterisk when using the Manager API but has to be initiated by you. Asterisk-Java provides the ManagerConnection interface that is well suited for this purpose. Its responsibility is to establish a TCP/IP connection to Asterisk (and reestablish that connection in case of a restart of Asterisk or a network failure), to enable its clients to send ManagerActions and receive the corresponding ManagerResponses and to dispatch events received from Asterisk.\ Once you are connected to Asterisk you can not only actively send ManagerActions but you will also receive MangerEvents from Asterisk. ManagerEvents usually inform your application about state changes that occur within your Asterisk server, for example due to a user dialing an extension or hanging up the phone. To recieve these events you can implement the ManagerEventHandler interface and register your handler with the corresponding ManagerConnection.

Please note that the AsteriskManager interface is still in an early state and the functionality exposed through it is rather limited. This interface will certainly change in the future so be aware of that when using it.